2 Comments
By Calaveras and Corazones Uncategorized

I won’t begin the year self-flaggelating by saying that I am the “worst (craft) blogger in the world”… but I will admit to perhaps not being the most attentive. I’m glad that blogs aren’t people with feelings because this one might start to feel a little neglected. And the less said about my Twitter account the better. If Twitter were a person, @AndCorazones would be dying of loneliness and talking to itself while rocking in a corner.

It should go without saying at this point that I’m not the most media savvy person around.

That said, it should also come to no one’s immediate surprise that I managed to travel 1,933 miles home for Christmas WITHOUT A CAMERA. “Surely,” I reasoned, “someone at home would have one that I could borrow.” Alas, in this age of cell phone cameras, that turned out not to be true. And really, what’s a craft-blog without pictures? So there you have it folks: my sad, pathetic reason for not updating this space in so long comes down to my inability to pack even the smallest of digital cameras into my suitcase.

Luckily for me, my good friend Renata showed up with her trusty, blinged out, Hello Kitty iphone (iphone cameras are NO JOKE) and took a few pictures for me so that I would have something to share with the two people who read this blog and here they are:

1. I never get as much done as I think I will when I go home, but one of the things that I DID finish was this little blue and white owl. He (She? I think Renata might have decided that it was a girl-owl) was a New Year’s gift for the aforementioned lovely with the iphone.  The body was constructed entirely out of 100% wool felt– which was really a pleasure to work with– and trimmed with vintage beads and some new sequins. 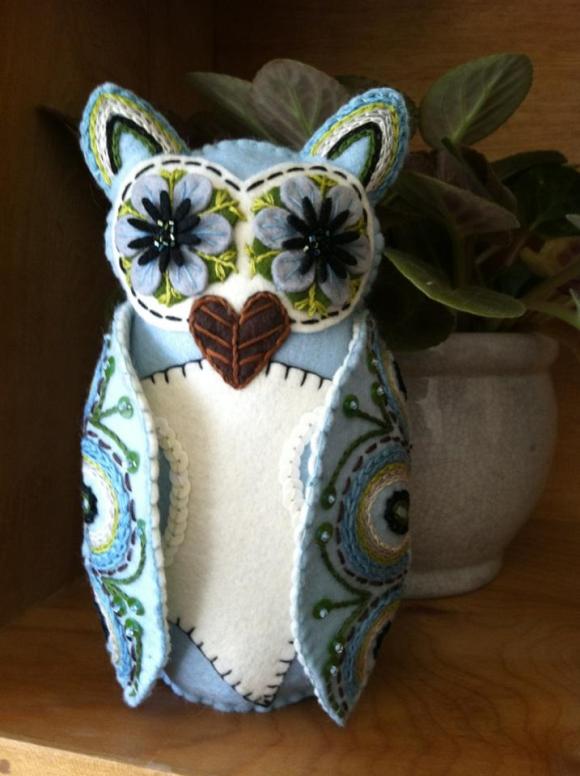 Go ahead and laugh if you like, but I Love (with a capital L) the thing I’m about to show you after the cut:

Here it is pictured resting between my grandmother’s industrial serger and her 40 year old industrial Mitsubishi table sewing machine.

Why, yes… that is Hello Kitty gracing the side of my machine and, no… that does NOT mean that this thing is a toy. It’s holding its own next to these industrial bad boys. It’s not ashamed of its cuteness. Nope… not one bit. I am Kitty hear me roar! Well… to be more accurate… purr contentedly.  Which is just fine with me because you see, several years ago, I made the mistake of asking my grandmother how to sew on her machine and well… it didn’t go very well.

Before I go on, let me say a few words in an attempt to dispel some myths about Mexican grandmothers.

Mainstream media representations of elderly Mexican women are limited at best…. Hell, mainstream representations of Mexicans/Chican@s period are woefully limited. And, within those narrow confines, older Mexicanas are very often relegated to depicting the black rebozo-wearing, rosary-praying, passive abuelita archetype. And, if she’s not busy praying for your eternal soul, she’s waiting for you with a kind word, a gentle pat on the head, and a fresh, home-made tortilla.

Yeah… that ain’t MY abuelita.

Don’t get me wrong… I’m sure that this sweet, gentle, biscochito-baking, tortilla-making abuelita really exists out there somewhere in the world. She may even be your abuelita… but she isn’t mine.* That particular brand of Mexican-Grandma is not part of my Chicana-(f)eminist “Way of Knowing.”  This is not to say that my grandmother doesn’t possess a million wonderful qualities because she absolutely does. In fact, she’s kind of a bad ass. She was walking the feminist walk before the “second and third wavers” were even thinking about talking the talk. So, though she possesses a multitude of virtues, I’m sorry to report that “patience” is not really among them.

…which brings us back to my first sewing lesson.

Armed with a simple pattern for a tote bag and some pretty fabrics purchased especially for the project, I asked my grandmother to teach me to sew. Being generous with her time and attention, she obliged and sat me down in front of her Mitsubishi with some scrap fabric to practice on. In no time at all, I had driven her to distraction with my ineptitude. I tangled thread, I kept unthreading the needle, I couldn’t see well enough to rethread the needle on my own (“Why can’t you see the eye?! You’re six inches away from it! I’m 80 and I can see it from here!”)… I BROKE a needle.  In no time at all, my “sewing lesson” devolved into my grandmother sewing a tote bag for me. I was banished to the ironing board to press the pieces of fabric in preparation for the machine.

I honestly think that part of the problem (well… aside from my legendary clumsiness) was that her machine has a pedal like a muscle car– and who learns to drive on a V8? The slightest touch would send the powerful Mitsubishi roaring to life and I was terrified of sewing my fingers. My sweet little Janome doesn’t have that issue. It’s like the Honda Civic to my grandmother’s Ford Mustang. There’s really no comparing the two.

I practiced on the Janome for a few days while I was in L.A. and then mailed it to myself rather than attempt to board a plane with it. The postman should be delivering my machine on Wednesday. So, fingers crossed (but hopefully not sewn together), I’ll be teaching myself to machine sew in the coming months and working on more complicated projects.

*Though she does make a mean guacamole.