Tag Archives: Day of the Dead

Hoot, hoot, hoot! Owls are on the way!

I bet that you already knew that a group of owls is called a “parliament”… but did you also know that you could call them a “wisdom?” A wisdom of owls… sounds very Harry Potter. 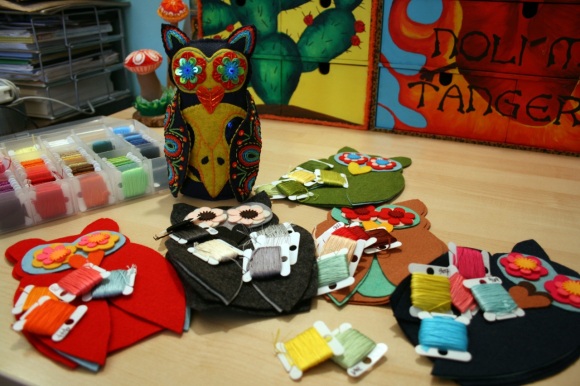 I’ve had these little guys cut out for quite some time now and I’ve finally gotten around to sewing them up. I’m always surprised by how much the things I make change from initial cut to final stuffing. What works in the planning and plotting stages doesn’t always feel right once you start adding embellishments, etc. The lovely Joni at Sugar Sugar was kind enough to carry my sugar skulls in her shop this October and she asked me if the skulls told me when they were “done.” The question took me so off guard I didn’t know what to say at first.

How did she know?

Before you call the men in the white coats, let me assure you that I don’t actually hear these little scraps of felt talking to me. But, when something I’m working on starts coming together, it lets me know whether or not I’m heading in the right direction with it. And if I’m heading off in the wrong direction… well… let’s just say that I have two or three unfinished skulls that have been sitting on a tray for the better part of the last four months. They’ll let me know when they’re ready, I’m sure.

Back to the owls…

These owls are coming along nicely and should be ready for the shop any day now. They each take about two full days to complete as they’re fairly labor intensive (and I sew painfully slowly), but I’m hoping they’ll go by a little faster after I’ve made a few more… and they become a little more vocal about what they want to look like. Hoot!